Q. How many books are in the Widow’s Brew series?

Q. Were there really women brewers in the Regency?

A. Maybe. In the Middle Ages and earlier, brewing was indeed women’s work—it was just another kitchen chore. But by the middle of the 18th century, the Industrial Revolution and the addition of hops to the recipe—hops, besides adding flavor, act as a preservative—transformed brewing from a home-based task to a commercial and thereby male enterprise. However, country houses—like Puddledon Manor—inhabited a middle ground. They often had their own brewhouses to supply the estate with beer and ale. Since country houses brewed on a small scale relative to the enormous commercial breweries in London, they could still follow the old ways. Their operations were more sophisticated than a simple caldron over an open fire, but they still relied on man—or woman?—power rather than steam. So, I think—or at least, I imagined—that it would be possible for a group of enterprising women to brew their own ale.

Q. How many books are in the Spinster House series?

A.The series begins with a prequel e-novella, In the Spinster’s Bed which is followed by three novels: What to Do with a Duke, How to Manage a Marquess, and When to Engage an Earl.

Q. Do I need to read the books in order?

A. I think it would be a good idea. In the Spinster’s Bed is a prequel, telling the story of how the long-term Spinster House spinster reconnected with her old love, married, and thus created an opening that the three friends—Cat Hutting, Anne Davenport, and Jane Wilkinson—vie for. What to Do with a Duke and How to Manage a Marquess happen at roughly the same time. The heroes of those books are cousins who have grown up together like brothers. When to Engage an Earl happens a few months after the first two books conclude. It’s in that book that the curse is fulfilled.

Q. Is there really a Spinster House?

A. No, but there is a house built for—and at the direction of two intrepid spinster cousins, Jane and Mary Parminter—and passed down for many years to spinsters. In 2013, when I was on the hunt for a new series idea, Mr. M. and I traveled around Devon, England. In Exmouth, we came upon a quaint little house, A La Ronde. The house itself is fascinating, but too unique to reproduce in my series. However, the story of the spinster sisters really caught my imagination. Here you can see the house as it is today and here, on the same web site, is a sketch of how it looked in the Parminters’ time along with a bit of history.

Q. What about the family curse that hangs over the Duke of Hart?

A. Well, that was inspired by a “real” curse—not that I truly believe in curses, you understand. On a research trip to the English Lake District in 2012, I visited Levens Hall, near Kendal, Cumbria. It has a fantastic Alice-in-Wonderland sort of garden—Mr. M and I took FAR too many pictures—but also some splendidly creepy ghost stories, including one that involves an angry woman and a male heir.

“The most famous legend is about a gypsy woman who is said to have died cursing the house, claiming that no male heir would inherit until the River Kent ceased to flow and a white fawn was born in the Park. Strangely, the estate passed through the female line for four generations until the birth of Alan Desmond Bagot in 1896 when the river did indeed freeze over and a white fawn was born in the park. The three male heirs since have all been born on freezing winter days. A grey lady still haunts the drive near the river and has often been seen by visitors, including one that had to swerve to avoid a collision with a mysterious figure near Levens Bridge.”

Q. And Poppy, the cat who shows up in all the Spinster House books—is she real?

A. Yes! On the same 2013 trip that we discovered A La Ronde, we stayed at The White Hart Hotel in Moretonhampstead and met Poppy. Here she is in her favorite chair in the lobby. One night I made the mistake of sitting in it—when she wasn’t there, of course. She gave me quite a look when she arrived to find her place occupied, but was too well bred to take issue with me. 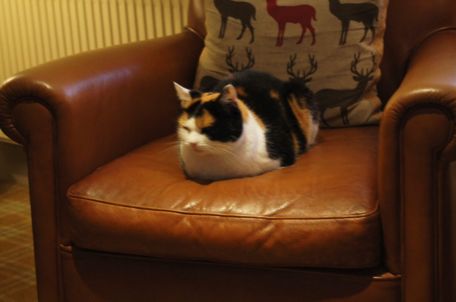 Here’s a picture of Poppy and her chair

Q. I want to read In the Spinster’s Bed, but it’s only available as an e-book and I prefer print. What can I do?

A. The entire novella is included in the print edition of How to Manage a Marquess.

Q. What comes after the Naked books?

A. The Duchess of Love series: a prequel novella that tells how the duchess met her duke and then three books, one for each of her sons.

Q. I see that the novella, "The Duchess of Love" is being released only in e-format. I prefer print. What can I do?

A. I'm happy to say that the novella will be included in the print version of Bedding Lord Ned, so anyone who hasn't made the shift to digital won't be left out!

Q. How are the Duchess of Love books connected?

A. The duchess, who's real name is Venus Valentine, Duchess of Greycliffe, is the ton's premier matchmaker, but she hasn't been able to find suitable matches for her three sons. Bedding Lord Ned is the story of her second son, Lord Edward—Ned for short—who's been mourning the death of his first wife and son in childbirth for four years. Venus is hoping that at this year's house party, Ned will finally put his tragedy behind him and see Ellie Bowman as more than merely a childhood friend. Surprising Lord Jack starts as Ned ends. Jack, the duchess's youngest son, flees the ball after Ned's betrothal is announced to avoid a particularly persistent miss. But the roads are icy, so he's forced to take refuge at an inn and share a bed with a schoolboy—Frances Hadley, who is actually a damsel in disguise. In Loving Lord Ash (March 2014), Ash, the oldest son and heir, leaves Greycliffe Castle the day after Jack to finally resolve matters with Jess, his estranged wife.

Q. Is your husband the Naked Duke?

Q. The Naked Baron happens before The Naked Gentleman—did your publisher make you do the books out of order?

A. Not at all. While I would love to say I have a grand plan for the Naked books, I'm afraid I'm more of a "pantser," which means I sort of figure things out as I go along. I met Grace and David as I was writing The Naked Gentleman. They intrigued me, so when I got offered a new contract and the chance to continue the Naked world, I chose to explore their relationship. Also, Gentleman was set in 1820 which is the year Prinny became George IV. I didn't want to go much beyond that historical marker, so I went back to 1816 and began the Baron at the Duke (of Naked Duke fame) of Alvord's ball.

Q. So how do the Naked books fit together? You don't have a dateline in any of them.

A. I don't put a dateline on the page because a date in black and white just seems so...definite. I like to leave myself wiggle room. I try to get things historically correct, but history isn't the focus of my books. For my own story-planning purposes, though, I need to have an idea of when everything is happening. But here's a rough timeline:

1816—The Naked Duke, The Naked Baron, and The Naked Laird, roughly concurrently—the Laird takes place during the Baron

1819—The Naked Earl and The Naked Viscount, roughly concurrently

Q. Do the books need to be read in order?

A. I don't think so—especially since I didn't write them in the order they "happened."

Q. How are the Naked characters connected?

A. Perhaps a sort of scorecard of heroes and heroines might help:

Q. Are the novellas connected, too?

A. Yes. The Naked Laird happens during The Naked Baron, at the house party hosted by Viscount Motton. The Naked Prince occurs a few months before The Naked King. Part of that story involves the "prince" trying to keep Stephen Parker-Roth from being trapped into marriage by an unsuitable female.

Q. Do I have to buy the anthologies to read the Naked novellas?

A. No. Both the Naked novellas are being re-released as e-novellas, The Naked Laird in November 2013 and The Naked Prince at the end of December 2013.

Q. How long does it take you to write a book?

A. I'm still figuring out the answer to this question. I think it took me over two years to write my first book, The Naked Duke, but I worked on it in fits and starts. I'd write regularly for a month or two, and then when things got busy with the kids, I'd stop for a while. I was also learning how to put a novel together. I went through three or four full drafts. Now I write faster—but not very fast, especially when life intervenes. And it never gets easier—it may even get harder. At the moment, I'm writing a book in about a year.

Q. How did you get published?

A. After I'd finished a draft or two of The Naked Duke, I joined the Romance Writers of America. I stumbled onto an email loop of people writing Regencies just when published author Susannah Carleton was beating the bushes for manuscripts to enter the 2004 Golden Heart contest and keep the Regency category alive. Since I'd saved our neighborhood swim team and school Cub Scout pack, I was used to helping groups in need. I edited my manuscript to fit the category length and, after Susannah graciously helped me write my first ever synopsis, sent it in. The story made the final round. One of the editors who judged it called to offer me a contract.

Q. Why don't you use a pseudonym?

A. When my editor called, I was so shocked, I couldn't think. It's probably just as well. I have a hard enough time remembering one name these days.

Q. Where do you get your ideas?

Q. Is your family proud of you?

A. Hmm. Sort of. When your immediate family consists of five conservative males and you are writing stories with s-e-x in them, mortification seems to be the predominant emotion.

Q. Who are your favorite authors?

A. Over the years I've had a number of authors on my must read list—Georgette Heyer, Joan Wolf, Mary Balogh, Madeline Hunter, Nonnie St. George, Julia Quinn, and Barbara Metzger. I also like science fiction and paranormal romance. (My husband has accused me of never being contemporary.) And I'm a slave for life to Lisa Kleypas, who gave me a cover quote for The Naked Marquis; Eloisa James, who provided a quote for The Naked Earl; and Elizabeth Hoyt, who so kindly read Duchess of Love and Bedding Lord Ned. Unfortunately, now that I'm writing, I'm not reading as much.

Sally Around the Web

Regency writers have to research lots of odd topics. Here are some internet sites and books I like, among many. However, perhaps the real gold mine for Regency information is The Beau Monde/Regency Fiction Writers.